Welcome to the Tri-Cities, a growing metropolitan area in southeast Washington where 300 sun filled days offer residents a year round outdoor paradise. Fun in the sun is a way of life in the Tri-Cities–one reason it’s among of the most popular spots to reside. Recreation and sports enthusiasts will love everything there is to do in the Tri-Cities, including bicycling, bowling, hunting, and soccer, as well as fishing, water-skiing and paddling on the Columbia, Snake, and Yakima rivers. The area's ten beautiful golf courses challenge the most experienced players, but can be enjoyed by beginners as well. Residents can also cheer on one of the three professional sports teams. After savoring just one of the local premium wines, you will understand why the area has been rightfully called the "Heart of Washington Wine Country." Tri-Cities, Washington boasts more than 200 wineries within a 50-mile radius, producing some of the finest wines in the world, thanks to the climate and geography of the area.

The Tri-Cities is a mid-sized metropolitan area in the southeastern part of the U.S. State of Washington, consisting of three neighboring cities: Richland, Kennewick and Pasco. The cities are located at the confluence of the Yakima, Snake and Columbia rivers in the semi-arid region of Southeastern Washington. A fourth neighboring city, West Richland, is generally included as part of the Tri-City area and region, as are a handful of unincorporated communities. Each city borders either another city or one of the area's rivers, making the Tri-Cities seem like one uninterrupted mid-sized city.

With a population of 258,400, Richland, Pasco and Kennewick made up the nation's fastest-growing metro area from 2010 to 2011, with a population increase of 4.3 percent, according to the U.S. Census Bureau. Two years ago, Kiplinger rated the Tri-Cities among the top 10 places in the nation to raise a family.

The Tri-Cities are in a semi-arid climate, receiving an average of 5 to 7 inches (130 to 180 mm) of precipitation every year. Winds periodically exceed 30 mph (48 km/h) when Chinook wind conditions exist. While there are an average 225 clear days every year, these are mainly between April 1 and November 1. Temperatures range from as low as −10 °F (−23 °C) in the winter to as high as 110 °F (43 °C) in the summer, and even reached 113 °F (45 °C) in July 2006. The region receives a yearly average of seven inches of snow but has received as much as 50 inches. Due to the semi-arid climate and subsequent large amounts of sand, a perpetual annoyance to residents is the amount of dust blown about by the frequent winds. Thanks to the aforementioned rivers, a large amount of cheap irrigation is available.

Since the 1940s, the Hanford site has employed a majority of residents. The United States government built a top-secret facility to produce and separate plutonium for nuclear weapons, and decided on an area just north of then-tiny Richland. The government built temporary quarters for the more than 45,000 workers and built permanent homes and infrastructure for other personnel in Richland. The city had an overnight population explosion, yet virtually no one knew what the purpose of Hanford was until the destruction of Nagasaki on August 9, 1945, by an atomic weapon containing Hanford-produced plutonium. After World War II   Hanford continued work on creating material for nuclear weapons during the Cold War. After the fall of the USSR in 1991, Hanford, the site of severe nuclear contamination, changed its mission from plutonium production to environmental cleanup and restoration.

The Hanford site is one of the largest cleanup projects in the United States, costing over $1.4 million per day to turn over 53 million US gallons (200 MI) of nuclear waste into glass through a process called vitrification. The process is proving to be one of the most dangerous in the world, but is essential to staving off nuclear contamination of the nearby Columbia River. Original estimates were $2.8 billion over five years to clean up the waste, though estimates quickly grew in the early 1990s to $50 billion with a completion date of 30 years. Costs are now projected at $112 billion with an estimated completion date of 2065. Over 18 percent of all jobs in the Benton Franklin County area are nuclear-related, research-related, or engineering.

The Columbia Generating station operates ten miles outside of Richland and is the only nuclear power station in the Pacific Northwest. It uses a boiling water reactor with a type 5 layout and was relicensed 10 years to operate until 2043. After nine years of construction, the plant began operating after a long and costly construction process that resulted in the largest municipal failure in U.S. history. Originally operated and owned by the Washington Public Power Supply System (WPPSS), the coalition changed its name to Energy Northwest in 1998 because of the negative association with the original name (commonly pronounced "Whoops" in place of WPPSS). WPPSS defaulted on $2.25 billion in bonds resulting in payments that exceeded $12,000 per customer, an amount which was finally paid out in 1992 (10 years later). The plant currently supplies 8.9 percent of the state’s power and has several safeguards to protect against seismic, natural, or terrorist threats.

The Tri-Cities economy has historically been based on farming and the Hanford Nuclear Reservation. From Pasco's incorporation in 1891 to present day, the Tri-Cities have had a large degree of farming thanks to irrigation by the three nearby rivers. Wheat is the most commonly grown product; however, large amounts of apples, corn and grapes are also grown, along with potatoes, and other products including asparagus. Cherries are also grown in the region. 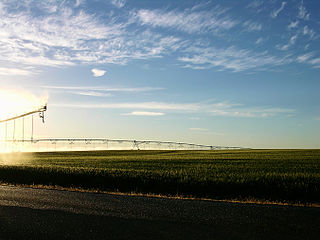 Grapes grown in the region are essential to the wine industry. Wineries draw a large population of tourists. With 160 wineries in the Columbia Valley, this industry accounts for $1 billion annually in Benton County alone. Many wineries such as Goose Ridge Estate Winery, Preston Premium Wines, and Tagaris Winery are open for wine tasting and special events. Often referred to as The Heart of Washington Wine Country, local and Tri-City wineries provide luxurious tours and give you the option of enrolling in their wine club membership.

The Tri-Cities’ unique climate allows the region to have a broad and sustainable agricultural economy. Local industries provide employment for thousands of people in the Tri-Cities area. Some of the top 20 employers in agriculture include ConAgra, Tyson Foods, and Broetje Orchards. Agriculture makes up 9.5% of employment in Tri-Cities and local businesses combined employ thousands of people. In 2012, the state of Washington was rated #1 in the nation when it comes to growing apples, hops, spearmint oil, sweet cherries, pears, concord grapes and processing carrots. The Mid-Columbia region including the Tri-Cities grows most of these crops. The region's climate and irrigation from nearby rivers, like the Columbia, Snake, and Yakima rivers, allow farmers to produce an abundant amount of corn, hay, wheat and potatoes. In Washington there are 39,500 farms; 1,630 of these farms are located in Benton County and 891 are located in Franklin County. Many farms can be seen from major highways and interstates.

The Spudnut Shop located in the Uptown Shopping Center in Richland

The Tri-Cities offers a wide range of locally owned and operated restaurants. These restaurants show the variety of cuisine offered to visitors and residents of the area. The Spudnut Shop, for example, located in downtown Richland, was opened in 1948 and has been family-run ever since. The Travel Channel featured The Spudnut Shop and their donuts “made from potato flour and then deep-fried to perfection.” Carmine's, also a family owned restaurant in the region, serves Italian food in a historic home that was constructed in downtown Kennewick in 1929. Another addition to these local restaurants is Monterosso's Italian Restaurant which serves lunch and dinner in an antique railroad dining car.

In sharp contrast to Seattle, the western slopes of the Cascade Mountains, and the rain forests of the Olympic Peninsula, the Columbia Valley enjoys long, warm, summer days, and crisp cool nights. The dry weather combined with rich volcanic soils and controlled irrigation produce near-perfect conditions for premium wine grapes.

The wide range of varietals grown throughout the region includes the noble Chardonnay, Cabernet Sauvignon, Merlot, Riesling, and Pinot Noir, among others. Unlike large established vineyards in other parts of the United States and Europe, the growers and winemakers of Washington will often devote personal attention to visitors, offering tastings and discussing their craft.

With more than 160 wineries within an hour’s drive, the Tri-Cities of Kennewick, Pasco, and Richland is truly at the heart of the Columbia Valley which includes the Yakima Valley, Walla Walla Valley, Red Mountain, Horse Heaven Hills, and Wahluke Slope appellations (areas with a distinctive growing climate that influences wine production). It is easy to conceive that Columbia Valley wineries would produce high-end, premium wines since the Tri-Cities area lies on the same latitude as the world-famous Burgundy and Bordeaux.